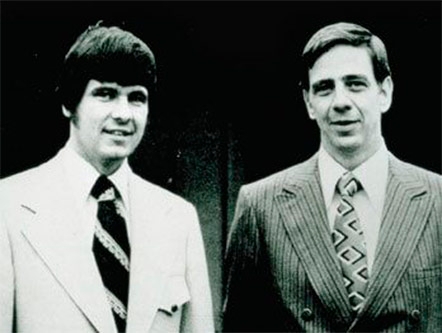 PIZZA HUT STORY – HOW IT ALL STARTED

The legacy of Pizza Hut® began in 1958 when two brothers from Wichita, Kansas, USA – Dan and Frank Carney were approached by a family friend with the idea of opening a pizza parlour. Although the concept was relatively new to many Americans at the time, the brothers quickly saw the potential of this new enterprise.

After borrowing $600 from their mother, they purchased some second-hand equipment and rented a small building on a busy intersection in their hometown. The building only had room for 25 seats – and the restaurant sign only had space for nine letters. They wanted ‘Pizza’ in the name, which left space for just 3 more letters. Because the building looked like a hut… Pizza Hut® was born.

The result of the Carney brothers’ entrepreneurial efforts was the foundation for what would become the largest and most successful pizza restaurant in the world. Pizza Hut® now serves over a million pizzas a day in 100 different countries and currently has over 15,000 restaurants worldwide.

The first Pizza Hut® outlet in Malta was opened in St. Julian’s in 1993. The restaurant was an immediate hit with the locals, with long queues outside, waiting to be seated. More outlets were opened subsequently in Sliema (1993), Valletta (1995) and Fgura (1997 – 2006).

In December 2004, the fifth outlet was officially opened in the centre of Bugibba. With the opening of Pizza Hut® Valletta restaurant, a professional home/office delivery service was introduced within the restaurant zones. This was a first in Malta, with branded bikes delivering pizzas in special delivery pouches, as hot as possible, on time and with a smile.

In October 2009 a new Take-Out and Delivery outlet was opened at Pavi Supermarket, Qormi.

Pizza Hut® restaurants in Malta are operated by Food Chain Limited, a member of The Farsons Group.